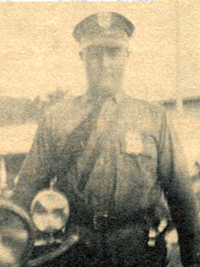 Motorcycle Officer W. Eugene Minor stopped a vehicle for a minor traffic violation on October 25, 1929. Unknown to Minor, the driver was transporting a load of stolen chickens. The man shot and killed Minor with a shotgun and was able to flee the scene before the murder was discovered. After attempting to evade a roadblock, the suspect abandoned his truck and was killed by officers in the area of Safety Harbor.